Chemical means, i. e., drugs, are employed almost exclusively by uncivilized peoples in order to produce intoxication during religious ceremonies. Brinton tells us that “in every savage tribe we find a knowledge of narcotic plants which were employed to induce strange and vivid hallucinations
or dreams …. The negroes of the Niger had their ‘fetish water‘, the Creek Indians of Florida their ‘black drink‘ for this purpose. In many parts of the United States the natives smoked stramonium, the Mexican tribes swallowed the peyotl and the snake-plant, the tribes of California and the Samoyeds of Siberia had found a poisonous toadstool; all to bring about
communication with the Divine and to induce extatic visions.”‘

The Indians of New Mexico who are “unacquainted with intoxicating liquors . . . find drunkenness, in ‘the fumes of a certain -herb smoked through a stone tube and used chiefly during their religious festivals.” Among the old Mexicans, a seed called Oliliuhgue entered into a vision-producing ” divine
medicine,” which could be obtained only from the priests.

” In the Indic and Iranian cult there was,” we are told, ” a direct worship of deified liquor analogous to Dionysiac rites.”

It has even been maintained that the whole Rig Veda is but a
collection of hymns for soma worship. The drinking ceremony was accompanied by magical incantations and by religious invocations. During the frequent libations that marked the sacrifice of soma, the officiating priest asked repeatedly for inspiration. He offered the liquor with these words:
“O,Indra, accept our offering . . . drink of the soma, thou the friend of prayer and of the liquor; well disposed God, drink in order to intoxicate thyself.” ” I pour it out into the double cavity of thy belly; may it spread through thy members; may it be sweet to thy taste; may it steal upon thee, O deliverer, veiled as women seeking a rendez-vous. Hero with the strong neck, full bellied, strong of arms, O Indra, praised by many, accept the pressed out soma, father of divine energy.”

Modern India has not renounced the use of drugs in religious ceremonies. The India Hemp Commission appointed by the English Government to investigate the use of hemp drugs in its Hindoo possessions, reported that several hemp preparations are ” extensively used in the exercise of religious
practices.” They found evidence of the “almost universal use of hemp drugs by fakirs, jogis, sanyasis, and ascetics of all classes, and more particularly by those devoted to the worship of Siva.”
The hemp plant is believed by priests and people to be a special attribute of that god. 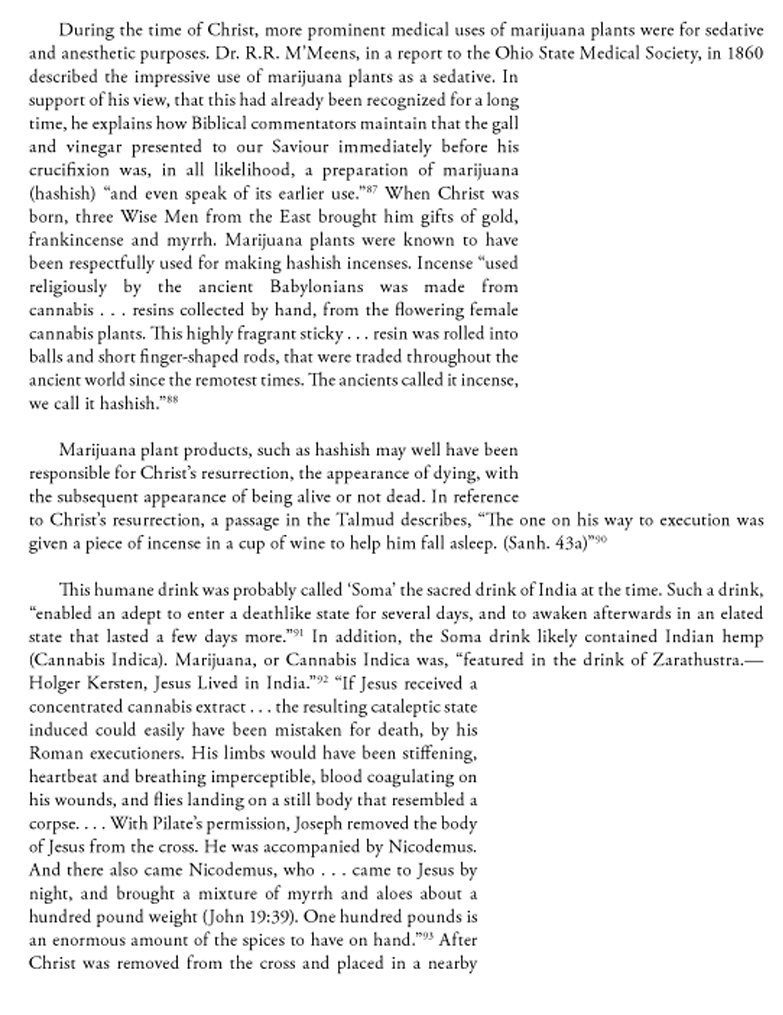